It is known, that water is a heterogeneous system consisting of the bound (associated) and free phase of water. The free phase of water or free water is a non-conducting dielectric medium. According to [106] the phase of the associated water is formed by the polymorphic modifications of ice, stabilization of which is provided by the hydrophobic interaction caused by the dipole moments of the static electric fields formed by the anion-radical oxygen forms of compounds, type ОН-(*)…НО2-(*) and exchange electron interaction. Consequently, the carriers of electric charge in a liquid exist in the phase of the associated water only and can stay there for a long time.

The cooperative interaction of electrons in the structure of the associated water phase leads to their combination into the electromagnetic vortices. Such vortices cover a significant number of water molecules by its action maintaining the metastable coherent state of the medium characterized by the processes accompanied by the decrease of entropy. The electromagnetic vortices fixed on base of the bound phase possess the longitudinal translation providing the self-reproduction of the structures and the field, that means they perform the energy and information exchange. The coherent wave structures formed in the water are the quantum objects that affect on the distances exceeding the intermolecular distances many times.

Coordinated vibrating states of particles and charges in the wave packages are similar to the interference of the wave functions responsible for the physical and chemical processes in the organism. For example, the biochemical reactions in the redox-processes including the stage of electrons transfer between the donor and acceptor are performed in the certain space and time limits of interference of the oscillators’ waves. This leads to the occurrence of the commensurable changes of the reaction rates or energetic activation barrier of the active particles yield participating in the chemical interactions and conformational transformations.

From the quantum positions the supramolecular structures of associated water represent the new object of research the significance of which is determined by its biological role. Actually, nucleic acids and proteins making the base of life become active only after binding with the associated water when they include the charges in the forms of radical ions. Due to the dynamics of the created quasi-static electric fields and magnetic phenomena the behavior of the protein bodies can be estimated as an open, dynamically changing and significantly non-equilibrium system being in the exchange interaction with the associated water by the volumetric liquid and the external medium.

If the model of electron state in the associates is used in the form of the coherent wave package the interaction of the protein bodies is performed via interaction of the chain structures of associated water. Then the equation of the quantum states of electrons in the associates is the condition required for the transportation of electrons in the chains and, on the contrary, their placement near the “working” resonance chain of the neighboring chain with the close but not equal parameters to the resonance will create the noises to such transport, that means, it will block the biological process.

The data regarding the dynamics of the nanoclusters of proteins and nucleic acids considered in the further sections determine the leading role of associated water in anisotropy of the intraglobular mobility and ion transport on the base of the conformation states of biopolymers regulated by the phase transfers of associated water.

The considered quantum concepts of the role of associated water in the processes of electron transfer allow evaluating the regulatory role of AOS in the cell metabolism from the new positions.

The main physical and physical and chemical processes in the water as a result of which the macroscopic quantum effects occur and its electrophysical properties are changed, currently are related to the instabilities of the phases of associated water [11]. When the instabilities occur the physical conditions are realized that reflect the processes of the non-contact and local transfer of electrons with participation of the active oxygen states (AOS) that can be represented in the form of the simplified scheme Figure 12): 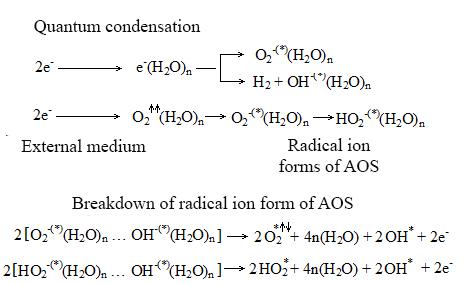 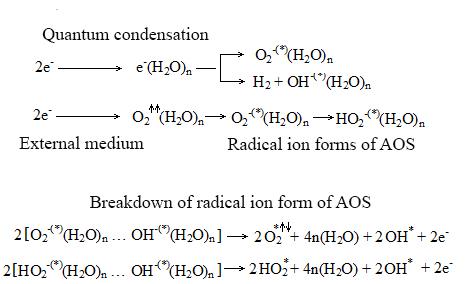 From the position of the classical elecrodynamics the second stage (quantum condensation) is related to the non-steady dynamics of the “seed” electromagnetic vortex characterized by the state of the phonon deficit the result of which is the temperature decrease of the phase state and phase transfers in the vortex itself [11, 67, 68]. From the quantum positions the electron transfer occurs as a result of the non-local action of the magnetic vector potential formed by the non-steady dynamics of the collectivized package of electrons released from the bound state as a result of the development of the phase instability.

Thus, quantum condensation of electrons with formation of the molecular hydrogen and short-lived superoxide radical ion is a source of the anion-molecular forms of the chemical compounds non-compensated by the charge, that lead to the charge non-equilibrium of the catalitically active cell structures. At the same time the enzymes containing in their structure transition element metals perform the functions of “modulation” of the state of the associated water phase stimulating the phase instabilities in it that is accompanied by the hyper-condensation of electrons. At the stage of phase growth the concentration of electrons increases in it and at the stage of its instability (breakdown) into the environment the electrons and the free radicals are dopped into the environment.

In this regard the work of the primary receptors of electrons in the organism and the system of non-specific regulation of the cell metabolism is connected by the formation and breakdown of the collectivized states of anion-molecular forms of AOS (ion-crystal associates [11]).